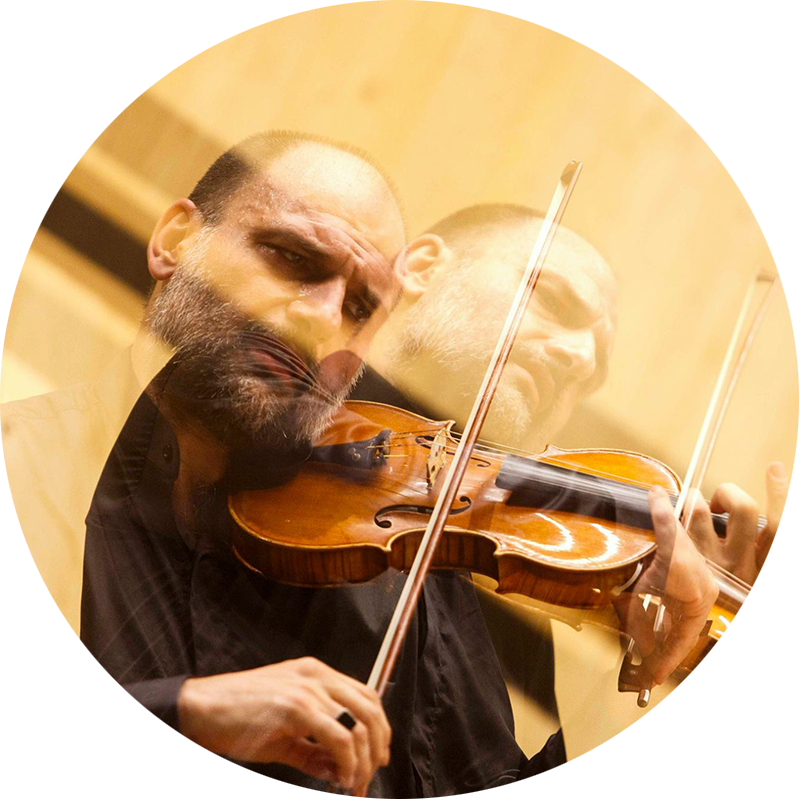 David Romano is the Second violin section Leader of the Symphonic Orchestra of Accademia Nazionale di Santa Cecilia. Born in Naples in 1972, he graduated in his city Conservatory with M° Aldo Pavanelli. In the Master Academy of Portogruaro, David has attended several MasterCourses by Pavel Vernikov and Zinaida Gilels. In 1995-96 he specialized in Chamber Music with Riccardo Brengola, in Accademia Musicale Chigiana (Siena), where he was awarded the Diploma on the Merits, the Honour Diploma and a scholarship. Thanks to the latter, he could participate, and he was the only European violinist to do so, to the “Okinawa Music Camp” and “Okinawa Festival”, Japan.

In 1999 David has achieved his Konzert Diplom in the Musik Akademie der Stadt of Basel, as a fulfillment of a three years Bachelor in Adelina Oprean’s konzert Klasse. David has attended Chamber Music Courses by M° Piero Farulli, Dario De Rosa, Milan Skampa in Scuola di Musica di Fiesole. A key figure to the development of David’s career has been Giuseppe Principe, with the support of whom he has tackled the repertoire for concertmeister.
Winner of several national and international Chamber Concourses (e.g. Città di Modena, Città di Napoli, Estate Musicale di Portogruaro, Lucus di Potenza), David achieved top prize in the Biennale violin Concourse of Vittorio Veneto. Already Concertmeister of the Italian Youth Orchestra, principal second in the Regional Orchestra del Lazio and principal solo violinist of the Nuova Orchestra Scarlatti, since 1996 he is an effective member of the Symphonic Orchestra dell’Accademia Nazionale di Santa Cecilia. Guest of several Festivals, he has cooperated, amongst others, with Pavel Vernikov, Alain Meunier, Massimo Quarta, Franco Petracchi, Carlo Bruno, Leonidas Kavakos, Martha Argerich. David is a founding member of the Stradivari Sextet, with which he is performing worldwide. Since june 2006 he is the Artistic Adviser of the Association “MAR-Musica, Arte, Ricerca” (Music, Art and Research), for which he has managed the production of music-theatrical events such as the show “Spuni cuni fait”, with music by Mozart, and “SCHUSCHO”, dedicated to Schumann and Shostakovich. www.associazionemar.com
Since 2009 he is the Artistic Director of Villa Pennisi in Musica, teaching and training and meeting point for musicians, architects, videographers, photographers, which takes place in summer at the family villa of composer Francesco Pennisi in Acireale. David plays an instrument by Lorenzo Ventapane, Naples 1830.