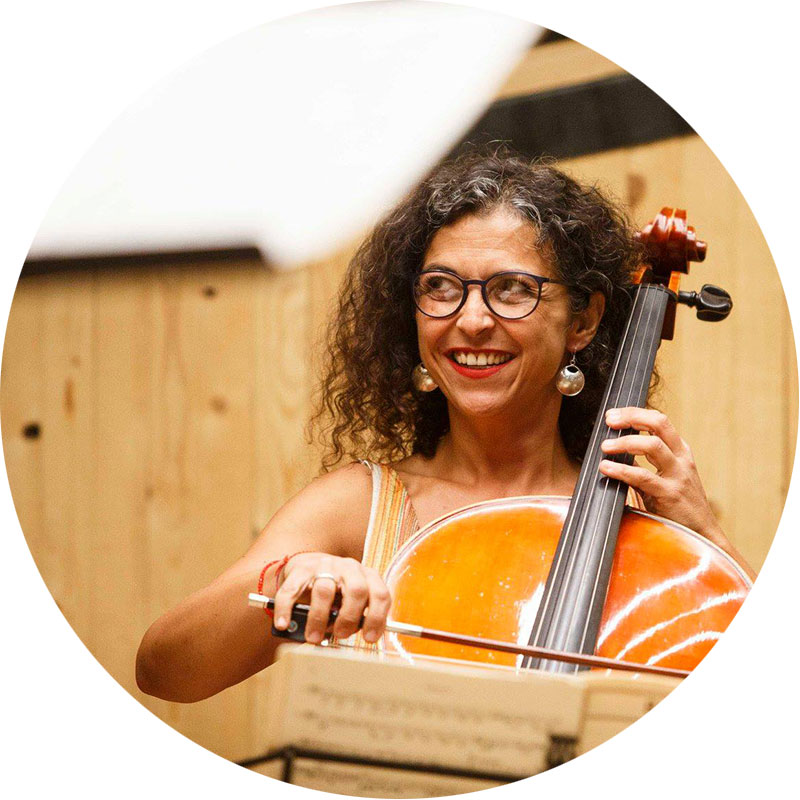 Born in Bari (Italy) in 1976, at the age of 20 Sara has graduated in Cello Performance with top marks, in her city Conservatory, with M° Vito Paternoster, teacher, soloist and orchestra conductor. At the age of 23, she achieved her Diploma in Chamber Music in Santa Cecilia Academy (Rome), with M° Felix Ayo. Throughout her studying career, she has also been guided by the following teachers: M° Luigi Piovano, principal cellist of Orchestra Accademia Nazionale di Santa Cecilia; M° Mario Brunello, M° U. Wiesel, Rubin Academy (Tel Aviv).

As a scholarship-winner, Sara has attended international Master Courses with Radu Aldulescu in Spain, Young Chang Cho of Essen Hochschule, Paolo Pandolfo for Ancient Music and the 2001 Chamber Music MasterClass of Mahler-Music and Youth Foundation in Bozen, Alfred Altenburger being the conductor. In 2009 she won the cello concourse in Orchestra dell’Accademia Nazionale di Santa Cecilia, after an already successful result in the September-2006 audition, and having already cooperated with the orchestra since 2004. In February 2008 she has qualified second in the cello audition of Maggio Musicale in Florence. Sara has cooperated as a principal-cello assistant and in the cello section with many other symphonic orchestras, such as the Teatro Comunale in Bologna, the Orchestra of the Centenary Verdi Opera Festival Orchestra (Parma), the Orchestra of Teatro Regio (Parma), the Orchestra dei Pomeriggi Musicali (Milan), the Regional Orchestra di Roma e del Lazio, the Orchestra of the Opera Theatre (Rome), the Philarmonic Orchestra of the Toscanini Foundation (Parma), the Orchestra of Ravenna Festival-Philarmonic Orchestra of la Scala, the “Instrumental Camerata” Città di Prato. Sara has been a member of the most important Italian Youth Orchestras: the one of Accademia Nazionale di Santa Cecilia Academy, of Mahler Academy (Bozen), the one of La Scala and the Cherubini Orchestra. Intense is the activity she carries out with prestigious Italian chamber ensembles, with which she has performed in Italy and abroad. Examples are Concerto Italiano, conducted by Rinaldo Alessandrini, Ensemble Cello Trekking, conducted by Mario Brunello, the Soloists of Accademia Filarmonica Romana, the Soloists of Orchestra del Centenario di Verdi, the Soloists of the Orchestra of the City Theatre of Bologna; Collegium Musicum (Bari), the Chamber Orchestra Traetta (Bari). Since 1995, year in which she has inaugurated the Italian Culture Festival in Saarbrucken, Sara has been performing in different cities and venues as a soloist. Consistent are also her experiences in the fields of jazz and ethnic music: she has recorded with the band Terrae, in the context of a wide research project on the Mediterranean music; she has cooperated with famous musicians, such as Bruno Tommaso, Gianluigi Trovesi, Antonello Salis, within relevant jazz festivals.