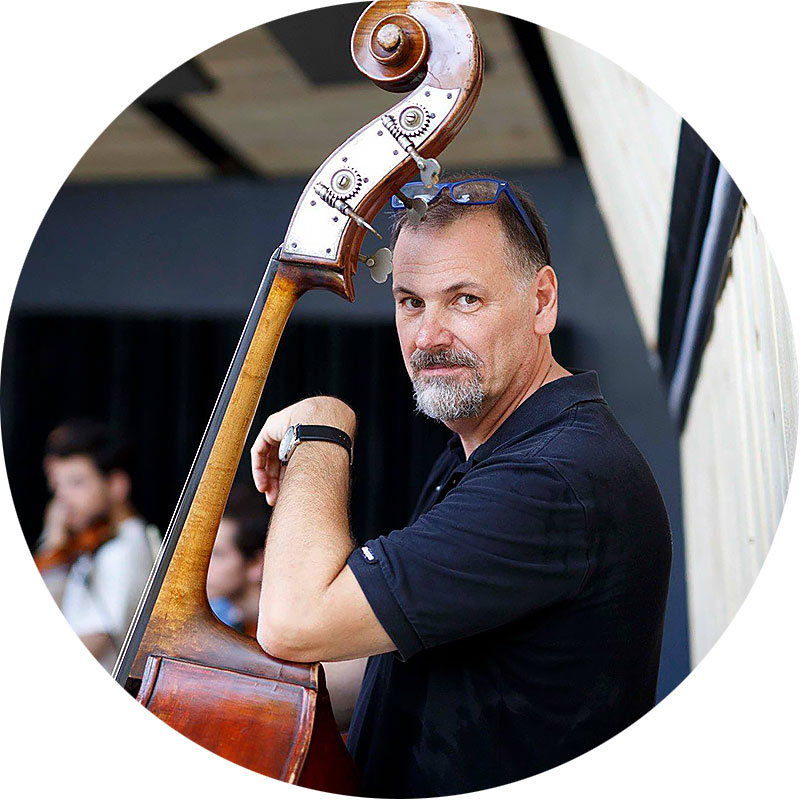 First bass solo of Orchestra dell’ Accademia Nazionale di Santa Cecilia in Rome. A pupil of Emilio Benzi, he has graduated at the Conservatory “Antonio Vivaldi” in Alessandria with honors. He improved in ‘Academy “Stauffer” in Cremona with Franco Petracchi, and later with Gary Karr. He was part of the ‘Symphony Orchestra of RAI of Rome from 1986 to 1996. Winner of First bass solo in Orchestra dell’ Accademia Nazionale di Santa Cecilia in 1996, currently holds this role. Since 1998 he has also, as a first bass, with the Radio Orchestra of Italian Switzerland in Lugano.

He had also carried out an intense concert and chamber musicand collaborates with internationally renowned soloists, in particular: in 1999 he made a tour in Italy and Germany with the ‘ensemble’ The Soloists of the Philharmonic Academy of Rome ‘, conducted by Giuseppe Sinopoli;in 2000 performed the Quintet “the Trout” by Franz Schubert with Wolfgang Sawallisch at the piano, for chamber music season of the Accademia Nazionale di Santa Cecilia in Rome.Since 2001 collaborates with cellist Enrico Dindo’s I Solisti di Pavia. Since 1993 is part of the quartet of basses The Bass Gang, with whom he toured the United States, Portugal and recently in Japan. The quartet is a regular guest of international eventsincluding the Competition “  G. Bottesini” Crema, the Competition “W.Benzi”of Alexandria, the “Festival of the ‘Island of Elba” (under the artistic direction of Y. Bashmet) and has recorded three CDs.
He is regularly invited to give master classes in various Italian Conservatories and teaches bass in several summer courses.