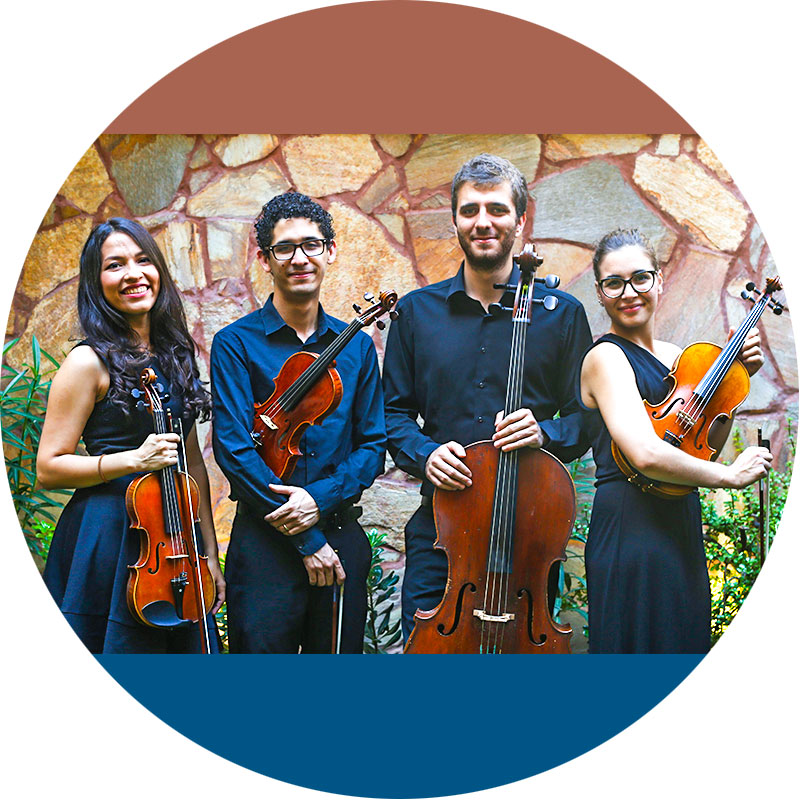 The “Katane” Quartet was born in Catania in 2018 under the guidance of Maestro Gaetano Adorno, professor of Chamber Music at the “Vincenzo Bellini Institute of Musical Studies”. Here the musical experience of the Venezuelan music education program “El Sistema”, a school that has existed for just a few decades and which already enjoys a reputation of international renown, and the ancient Italian tradition, are combined. In May 2018 the Katàne Quartet won the first prize of the “Città di Siracusa” International Competition by performing the quartet op. 18 n 3 of L.V. Beethoven.

The Quartet played several times in August 2018 for the summer season “I concerti dell’Istituto” of the Bellini Institute of Musical Studies expanding its repertoire with jewelry from the chamber music such as” Langsamer Satz “by Anton Webern and the” Quartetto per Archi “by Nino Rota, a little-known work of great stylistic importance. It played for the Unione Italiana Ciechi in his XXVI concert season and inaugurated the VII season of the Cultural Association “Promethéus” of Catania in the picturesque Liberty framework of the castle of Leucatia. In December 2018 it collaborated with the International Studies Center “Sigismund Thalberg” of Naples performing the Quartet op. 51 n.2 by Johannes Brahms. In 2019 it was invited to play during the week at the “S. Anna” Church in Catania. The Katàne took part in the concert seasons A.F.A.M. and A.S.A.M., contact Floridia and Sircacusa. The Quartet collaborated with Giovanni Roselli, first flute of the Teatro Massimo Vincenzo Bellini of Catania. The quartet was selected to join the “Le Dimore del Quartetto” network in October 2018. This October 2018 was selected to join the network of “Le Dimore del Quartetto”.

Ricardo Urbina,
Violin I Born in Maracaibo (Venezuela) in 1991 he began studying the violin at the age of 8 at the “Jose Luis Paz” Conservatory of Maracaibo. He was the founder and director of the “Zulia Chamber Orchestra” and the assistant director of the “Rafael Urdaneta Youth Orchestra”. At the age of 10 he began his training experience at the Orchestra of “El Sistema” (Venezuelan musical project which became famous thanks to JA Abreu) directed by great masters such as G. Dudamel, C. Abbado, S. Rattle, to name just a few. From 2015 he is in Italy to share his experience of the “Abreu Method” in some projects among which stands out “Alkantàra, small notes in the footsteps of Abreu”. He currently continues his studies at the “Vincenzo Bellini” Music Institute in Catania under the guidance of Maestro Vito Imperato (shoulder at the Massimo Vincenzo Bellini Theater in Catania).

Ariadny Alvarado,
Violin II Born in Venezuela in 1991, she began studying the violin at age 12 within the recognized “El Sistema” music education program. She was the shoulder of the Rafael Urdaneta Youth Orchestra for 6 years, eventually becoming “teacher” of “El Sistema” in 2014. In 2017 she obtained a degree in Violin at the “Zulia” University of Maracaibo and in the same year she moved to Italy to share his experience of the “Abreu Method” in the project “Alkantàra, small notes in the footsteps of Abreu”. He is next to the two-year degree in Violin at the “Vincenzo Bellini” Musical Institute of Catania under the guidance of Maestro Vito Imperato (shoulder at the Teatro Massimo Vincenzo Bellini of Catania).

Clelia Lavenia,
Viola Born in Catania in 1993 began the study of the violin at the age of ten. From 2009 to 2015 he studied at the “Vincenzo Bellini” Music Institute in Catania, followed by Maestro Giovanni Anastasio, earning a First Level Degree. Since 2015 he has been part of the famous Italian Youth Orchestra, with which he has performed alongside world-renowned conductors, including G. Pretto, A. Lonquic, A. Poga, J. Valcuha, A. Lucchesini. In 2016 he spent a period of six months at the “Academy of Music and Performing Arts” in Tilburg (Holland), perfecting himself with M Chris Duindam. ̊ He worked as a violin teacher at the “The Invisible City” Foundation in Adrano and at the “Free Sound Studies” music school in Viagrande. He currently continues his studies at the “Vincenzo Bellini” Music Institute in Catania under the guidance of Maestro Alberto Salomon.

Giulio Nicolosi,
Cello Born in Catania in 1995, he began studying the cello at the age of 12. From 2008 to 2018 he studied at the “Vincenzo Bellini” Musical Institute of Catania, followed by Maestro Maurizio Salemi. He performed in Sicily in various chamber formations from the duo to the quartet with the first parts of the Theater “V. Bellini “of Catania. He collaborates with several orchestras led by well-known conductors such as M. Michailidis, A. Cedrone, D. Crescenzi, among which “Taormina Opera Stars” as first cello playing in Italy and in Spain. From 2016 to 2017 he worked as a teacher in the project “Musicainsieme a Librino”.