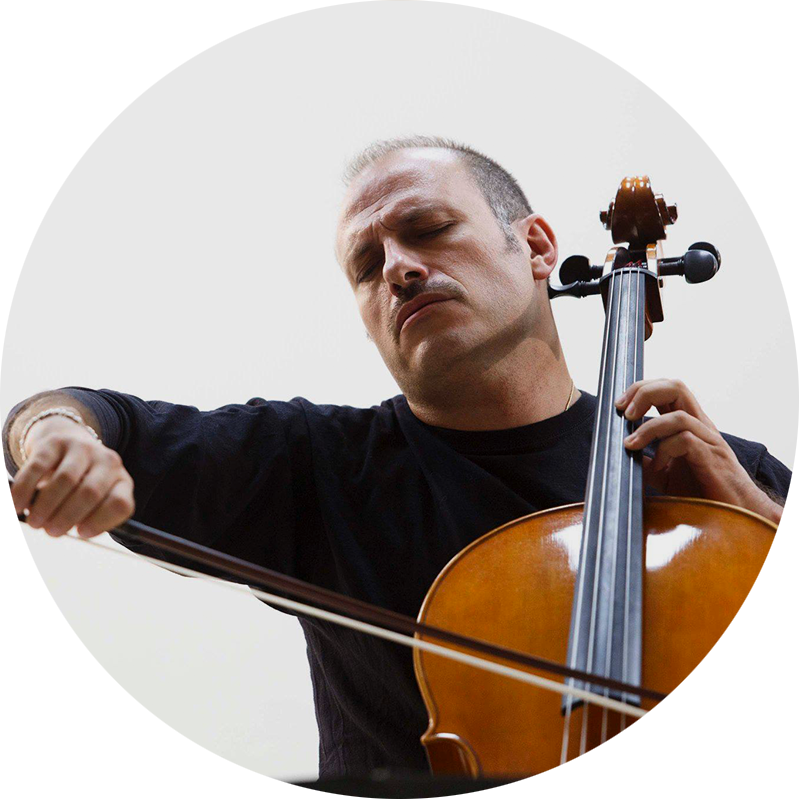 Born in Napoli in 1976, he gets his Diploma under S. Altobelli with Maximum Degree at Napoli Conservatory in 1997; in same year he gets Sebetia-Ter Premium as “sure promise of italian cello”. Successively he takes lessons with F. M. Ormezowsky, M. Drobinsky, M. Maisky at Chigiana Academy where he gets Scholarships and Degree Diploma in 1995 and 1996. Since 1996 to 1998 he’s Solo Cellist in Italian Youth Orchestra at Scuola di Musica di Fiesole, where he follows Cello and Chambermusic Masterclasses with A. Baldovino, P. Farulli, A. Faja, Trio di Trieste and M. Skampa, getting his Diploma with Maximum Degree in 1998.

In same year he gets place in Konzertklasse of T. Demenga at Musikakademie der Stadt Basel (CH), getting his Solistendiplom with Maximum Degree in 2001. In this occasion he performs Dvorak Cello Concerto with Basel Symphony Orchestra under J. Henneberger. For this project he gets a Scholarship by the City of Napoli as “particularly talented student out of Italy”. In 2000 C. Abbado chooses him as Solo cellist of the Gustav Mahler Jugendorchester, where he plays for next two years, getting Cello and Chambermusic lessons by G. Rivinius, W. Boettcher, W. Schultz. In. 2001 he wins E. Contestabile Scholarship of the Chigiana Academy in M. Brunello cello class and continues to take lessons with him for next two years at Romanini Academy, Brescia. He wins following competitions: Orchestra of the National Academy of Santa Cecilia in Rome (Third Cellist Substitute to Solo place in 2001 and Second Cellist subtitute to Solo in 2007), City of Aversa, International Summer of Portogruaro, City of pozzuoli, City of Modena, City of Napoli, City of Vittorio Veneto. He collaborated as Solo Cellist with Rai National Symphony Orchestra and actually collaborates as Solo Cellist with Teatro Regio of Torino Orchestra and Stresa Festival Symphony Orchestra. He played under buton of most important musicians as S. Ozawa, P. Boulez, M. W. Chung, K. Masur, G. Pretre, A. Pappano, R. Muti, G. Sinopoli, W, Sawallisch. Very interested in Chambermusic he’ s founding member of Stradivari Sextett and has played with such artists as F. Ajo, M. Brunello, G. Carmignola, L.Defusco, F. Bartolomee, K. Blacher, Lang Lang, Alexander Lonquich. He plays on a E. Montefiori cello, 1860.