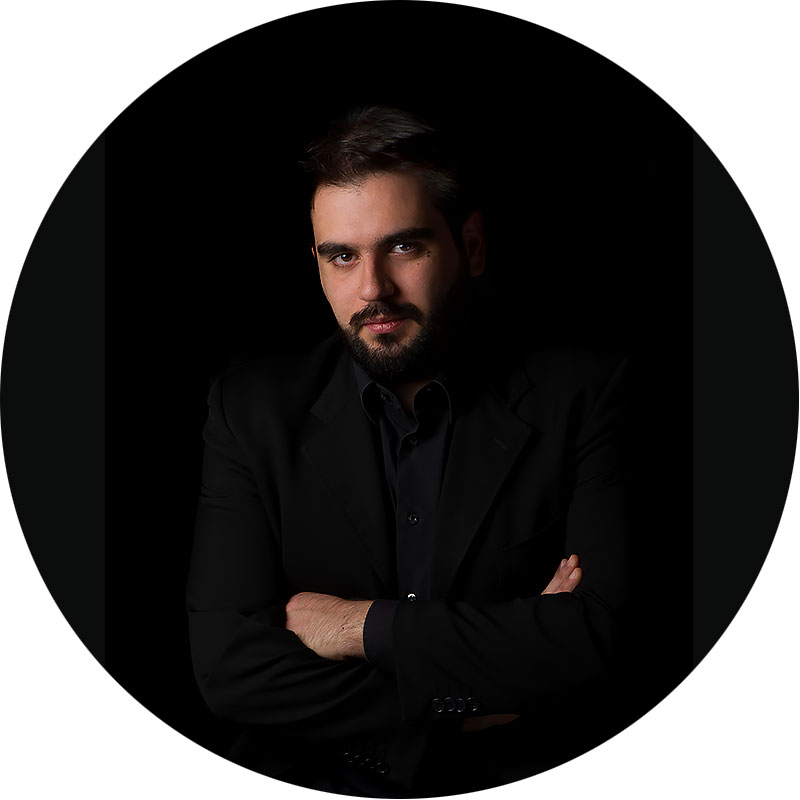 born in 1985, graduated very young with the highest honors, at the Conservatory of Cosenza. From 2003 he moved to Rome where he obtained, in 2006, the academic Diploma of level II with the highest honors at the “Conservatorio Santa Cecilia" and in 2007 Diploma in chamber music at the “Accademia Nazionale di Santa Cecilia” in Rome, always with honors, obtaining the Guarino prize as the best graduate of the year. Winner of over forty national and international solo competitions, he achieves international notoriety for his intense activity as a chamber musician with the Quartetto Avos (now Avos Piano Quartet) formed in 2007, the only one to have won, in 2009, the two most important Italian chamber music competitions (Gui Award of Florence and Trio of Trieste Prize) both members of the World Federation of Geneva.

He has been invited to the most important Italian concert seasons (Teatro "La Fenice" in Venice, Lingotto of Turin, Friends of the music of Verona, Teatro "Coccia" of Novara, Teatro Alighieri in Ravenna, Orchestra da Room of Mantua, Teatro Verdi of Trieste, Teatro Comunale di Firenze, Teatro Verdi of Pisa, Accademia Chigiana of Siena, music Ensemble of Bologna, Sala Sinopoli in Rome for the Accademia Nazionale di Santa Cecilia, Fioravanti of Prato, Teatro Mancinelli of Orvieto, etc.) He has also toured extensively in other countries such as: Germany, France, Spain, Scotland, Switzerland, Holland, Romania, Japan, UAE, etc. The versatility and the passion for the chamber music Repertoire (he has already performed in public all the chamber music with piano by Brahms) have allowed him to collaborate with Franz Bartolomey, principal cello of the Wiener Philarmoniker, Carlo Maria Parazzoli, concertmaster of the Orchestra of the Accademia Nazionale di S. Cecilia, with whom he collaborates steadily in duo, the clarinettist Darko Brlek, the singers Daniela Dessì, Fabio Armiliato and Thiago Arancam, the violist Isabel Charisius ( Alban Berg Quartet). From 2012 he collaborated with the "Da Vinci Trio" featuring the first parts of the Scottish Opera in Glasgow. He has also worked with the Savinio Quartet, flautists Angelo Persichilli and Andrea Oliva, violinists Wolfgang Marschner and Boris Belkin, cellists Rocco Filippini and Natalia Gutman, conductors Antonio Pappano and Lior Shanbadal. In 2010 he obtained the prestigious Diploma of honour of the Accademia Chigiana in Siena. He recorded a Cd for the magazine "Suonare News" released in March 2011 with the piano quartets of Mozart and Brahms. He recorded for the famous record company "Brilliant Classic" the integral of the piano quartets of Saint-Saens. He also made live recordings for Rai and Nami Records. In 2016 he founded, together with the Avos Piano Quartet, the Avos Chamber Music Project, an international project in which young talents are allowed to perform within important concert seasons with renowned musicians. He is the artistic director of the "Trapani Summer Festival". From 2012 to 2017 he taught piano at the Conservatory "S. Cecilia in Rome", he is currently teacher of chamber music at the “Istituto Superiore di Studi Musicali di Modena” and holds a Master in chamber music at The "Sherazade" Music Academy in Rome.